Back to Basics: What is Boolean Logic?

What is Boolean Logic?

Boolean Logic is a form of algebra which is centered around three simple words known as Boolean Operators: “Or,” “And,” and “Not”. At the heart of Boolean Logic is the idea that all values are either true or false. Within the Lotame platform, the use of Boolean Logic allows for the creation of more complex audience definitions, allowing for audiences to be built to a very specific set of definitions. This article explores the uses of individual Boolean operators and how they relate to building audiences.

An Example of “OR”

An Example of “AND” 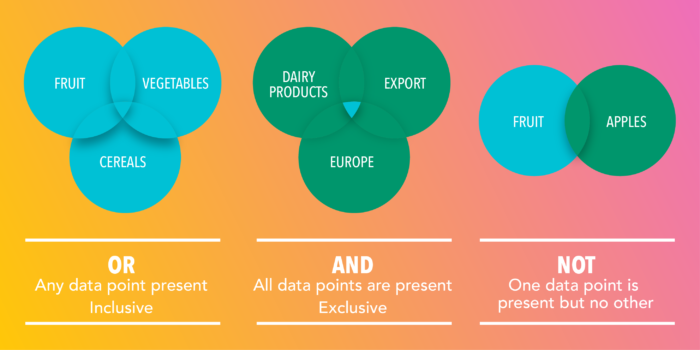 An Example of Boolean Logic at Work In Building Audiences : OR The Boolean operator “OR” is used to express that as long as one of two or more conditions are, met the value of a specified query is true.

For example, to build an audience which encompasses anyone who enjoys Mexican, Chinese, or French Cuisine, the following audience definition would apply:

Using the “OR” operator would ensure that anyone who has shown an affinity for at least one of these cuisines will be included in the audience created.

An Example of Boolean Logic at Work In Building Audiences : AND As a Boolean operator, “AND” serves to indicate that ALL specified conditions must be met in order for a query to return true.

In the event that a client were building an audience and wanted to target only users who had shown an affinity for Sports Cars and Fishing and History, the following audience definition would apply:

The use of the “AND” operator means that a user must meet ALL of the specified criteria to be included in the audience; users who merely like Fishing or like only Fishing and History (etc.) will be excluded from this audience definition.

An Example of Boolean Logic at Work In Building Audiences : NOT<

For example, to create an audience of users over the age of 18 (NOT 13-17 years of age) with a demonstrated interest in movies, the following audience definition would be used:

In this instance, the “NOT” which prepends 13-17 means that no users within this age range will be included in this audience definition. It is also worth noting that the “AND” operator is used here as well. Translated into plain English, this definition would be read as “Users who are not between ages 13 and 17 who have an interest in movies.

Users of Lotame’s Data Management Platform (DMP) use Boolean Logic to build audiences for targeted ads, content customization, and many other business applications. By understanding who your audience is, and grouping them into audience segments, you can personalize your messaging to increase engagement with your products & services.

Learn more about a DMP in this short video:


Want to learn more? Let’s chat. We’d love to show you a demo of our platform and how it can help your marketing work harder for you, to increase engagement and conversion rates. Fill out the form below and get in touch with us!